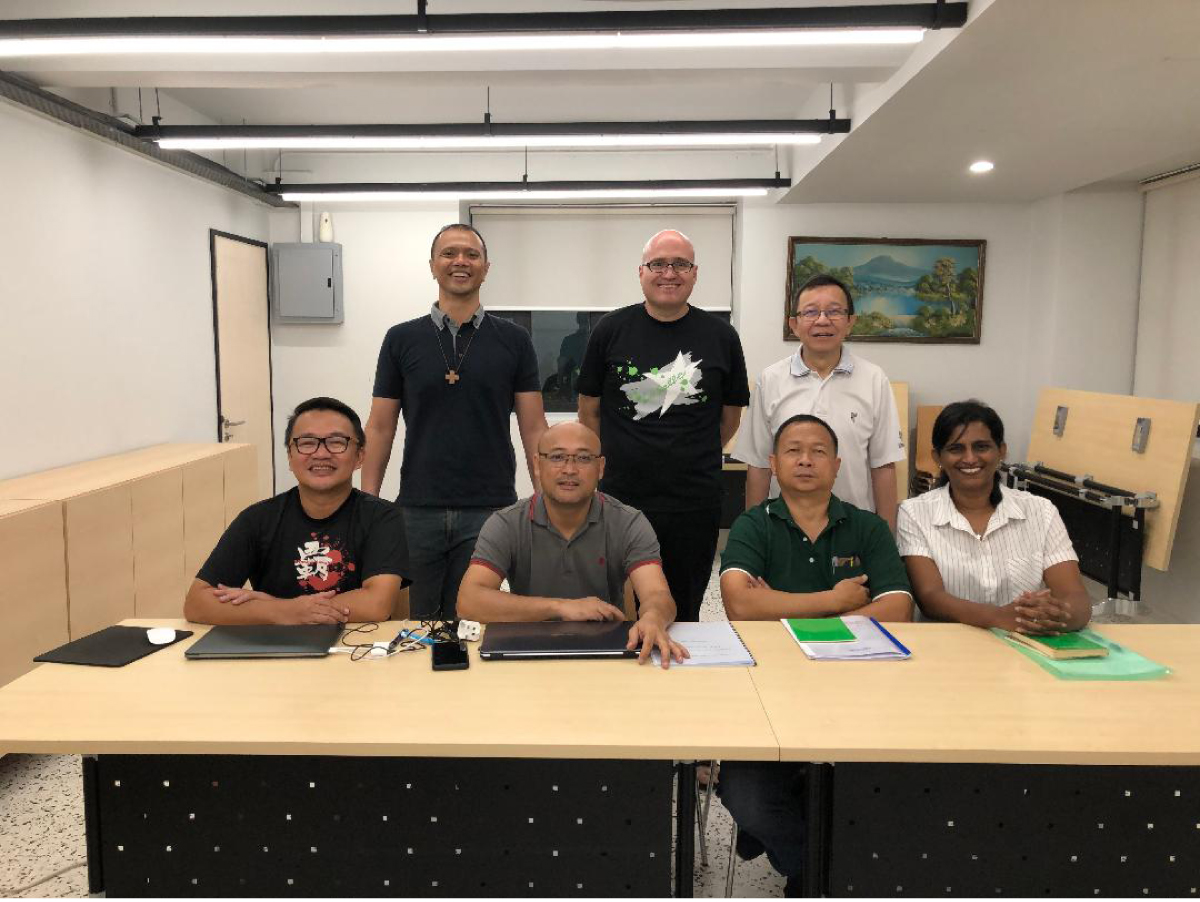 The first day of the meeting was dedicated to a formation session about “Lasallian Formation for Mission: The Pilgrim’s Handbook” facilitated by Br. Jose Mari Jimenez FSC (Br. JJ). Br. JJ invited the IFB members to be mindful of the importance of formation programs and guidelines that respond to the lived experience and cultural context of the candidates while integrating them with Christian and Lasallian Stories.

The second part of the meeting was dedicated to begin the process of elaboration of the LEAD Initial Formation Guidelines, taking into consideration The Pilgrim’s Handbook from the center of the Institute. Also, planning for the next three years was done, including workshops for current and future Formators and creating opportunities to meet formands and young Brothers on each of the sectors where the IFB is held.

On 12 October, the IFB, together with the Brother from PJ, joined the La Salle Petaling Jaya School on its 60th Diamond Jubilee Gala Dinner. The alumni understanding of being ‘Lasallians' can be seen in the following two ideas from those who participated in the gala dinner:

“Join us at this once-in-a-lifetime, grander-than-grand event as we travel back in time, celebrating a carefree Malaysiana, where Lasallians mingled happily, regardless of race or cultural differences” and “But in our time of joy , we also have to remember our less fortunate brothers. This is the true spirit of La Salle. This Gala Dinner will also support our initiatives to provide assistance to needy Lasallians.”(https:// lasallepjalumni.org/diamond-jubilee-gala-dinner/) (Text & Photo: Br. Antonio Cubillas FSC)

Collaboration In The Education Mission 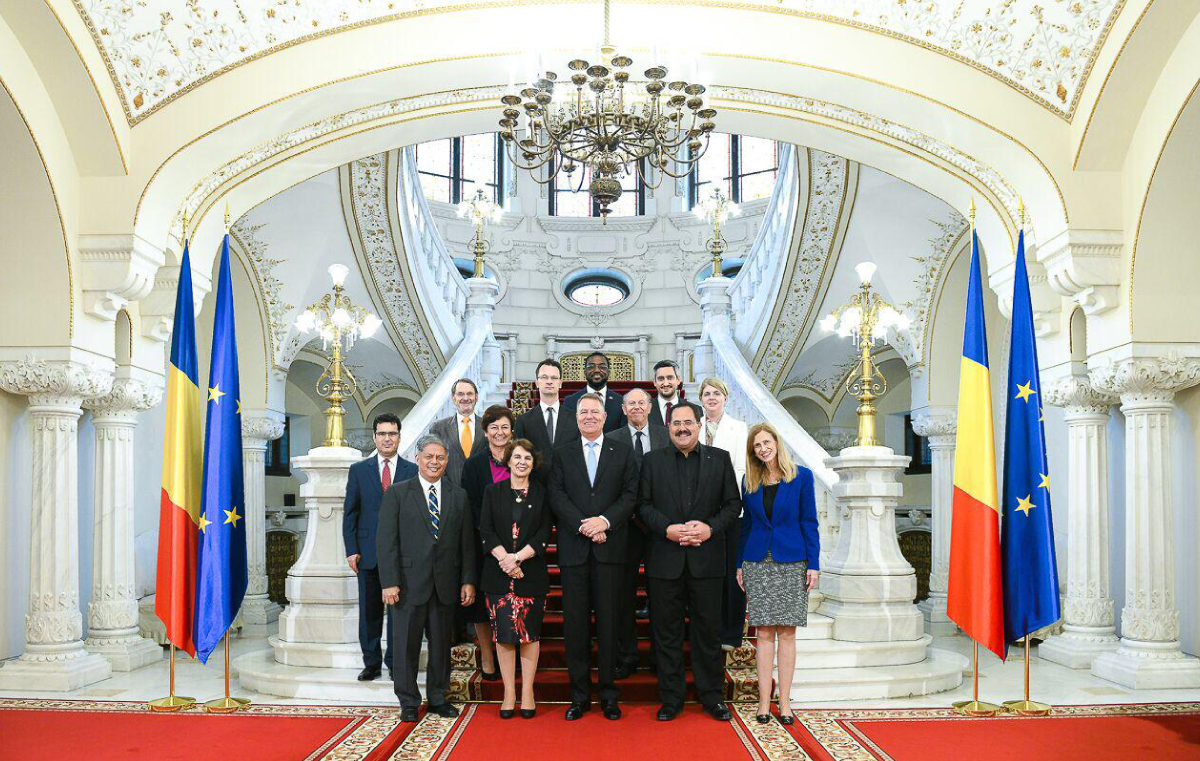 Our own Br. Armin, being a former education minister of the Republic of the Philippines, attended the Atlantis Group meeting. The group delved into disruptions, trends, and the future of the education sector worldwide. As a concrete step, the group invited Romanian President, Klaus Iohannis, to champion and support of their advocacy.

The Atlantis Group members are select former education ministers and chiefs of state who are taking steps to address the challenges in global education and to inform a new generation of leaders and policy-makers in the field of education policy.

The group was created by the Varkey Foundation with a mission to contribute to the improvement of educational standards for children from socially disadvantaged categories, by increasing teaching at a global level. (Text & Photo: Mr. Jyron Raz) 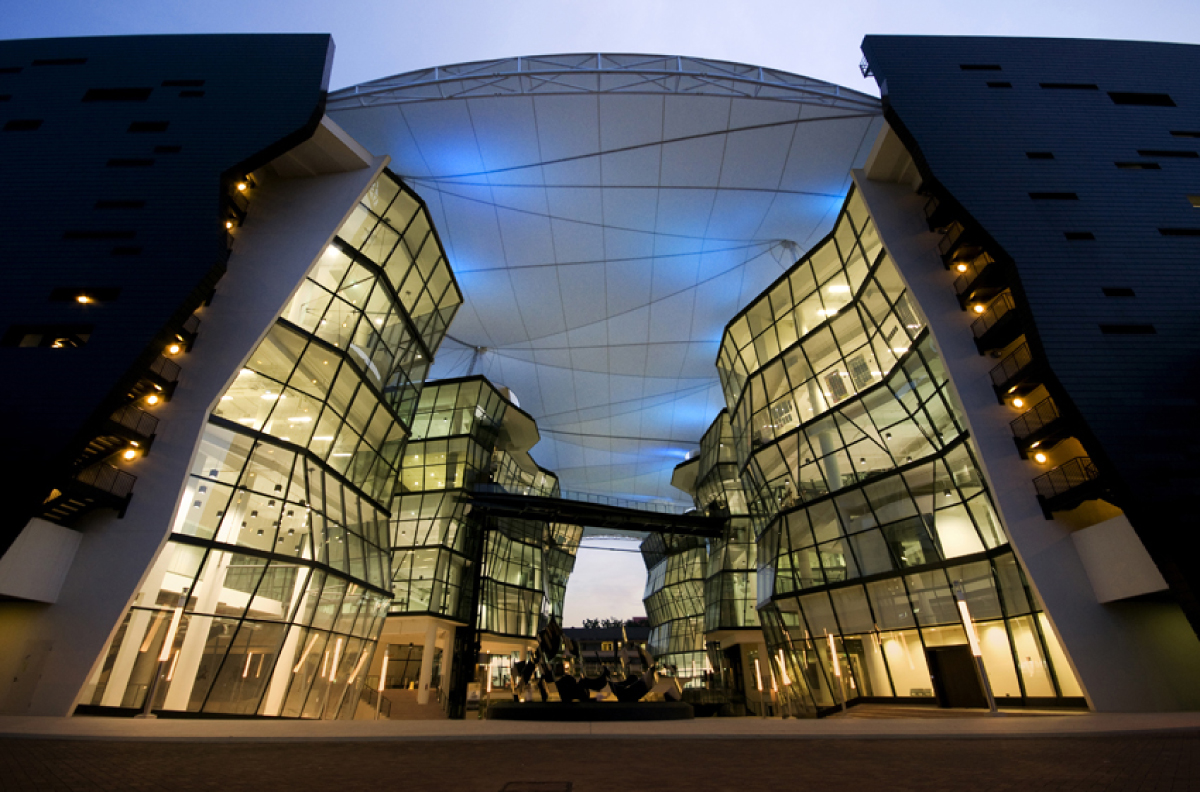 Of nearly 300 private education institutions registered in Singapore with the Committee for Private Education (CPE), LASALLE remains the first and only Singaporean institution to receive the EduTrust Star since the EduTrust Certification Scheme was established in 2009.

Click on the link for the full article: https://www.lasalle.edu.sg/news/second-consecutive-edutrust-star-award-affirms-lasalles-commitmentquality?utm_source=All+LASALLE+Full-time+Staff&utm_campaign=8da421a8c3- EMAIL_CAMPAIGN_2018_04_20_COPY_01&utm_medium=email&utm_term=0_e7a9ff5105-8da421a8c3-3 2115365

A Day Of Celebration For SJIIM IBDP Scholars 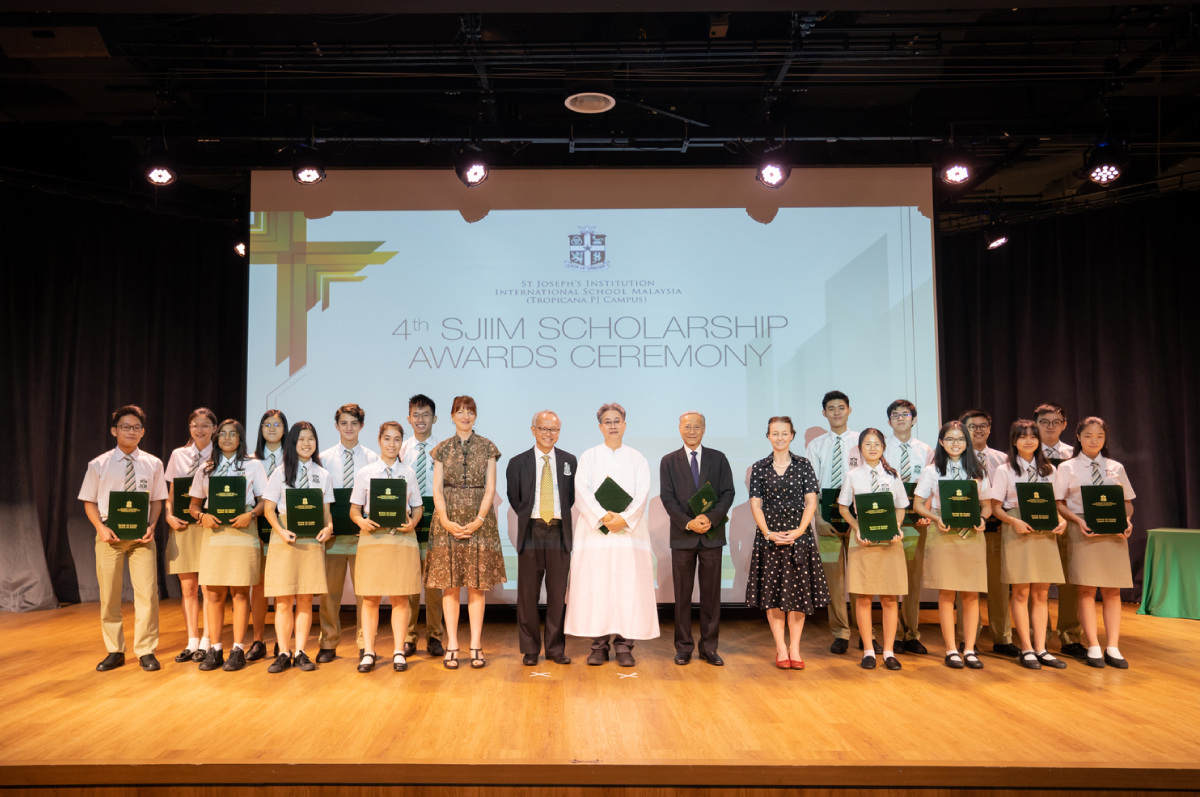 St. Joseph’s Institution International School Malaysia (SJIIM) recently celebrated its fourth batch of International Baccalaureate Diploma Programme (IBDP) scholars through a Scholarship Awards Ceremony on 27 September 2019. The event was graced by the SJIIM Board of Governors Chairman and Brother President of SJI Singapore, Dato’ Br. Paul Ho as the Guest of Honor and notable guests such as Dato’ Richard Ong who is a council member of the Tan Tan Sri Tan Foundation.

A time honoured Lasallian tradition, the IBDP Scholarship Programme is a cornerstone feature of St. Joseph’s Institution International Schools in Singapore and Malaysia. The scholarship programme is now in its fourth cycle and has been supported by many organizations and well wishers since its inception in 2016 and in particular, the Tan Chin Tuan and Tan Sri Tan Foundation who have been significant benefactors of the initiative.

An all-round enriching scholarship experience, the IBDP Scholars of this programme also had the opportunity to participate in a Lasallian Leadership Training Camp in the Philippines this year which focused on Lasallian Formation, Leadership Training and Service Work. This helped to prepare the school’s scholars as Senior Lasallian Student Leaders to serve the school’s community and the needy on their return from the camp.

The SJIIM IBDP Scholarship Programme is a unique outreach initiative of St. Joseph’s Institution International School Malaysia. It offers a 2-year scholarship to pursue the International Baccalaureate Diploma Programme in SJIIM. Applications are evaluated based on merit and means and all applicants are expected to be able to provide evidence of good academic performance and demonstrate active participation and leadership in service & co-curricular activities. (Text & Photos: Mr. Neoh Soon Ken)

Our Very Own Lasallian Star

On 26 August, 1850 students from both the Elementary School and High School and approximately 220 members of staff, gathered on our new upper field with the ES students in green, and the HS students in white, to form a dramatic, living symbol of our Lasallian identity in the shape of a huge Lasallian Star.

Click on the link for the full article: https://sji-international.com.sg/news/387 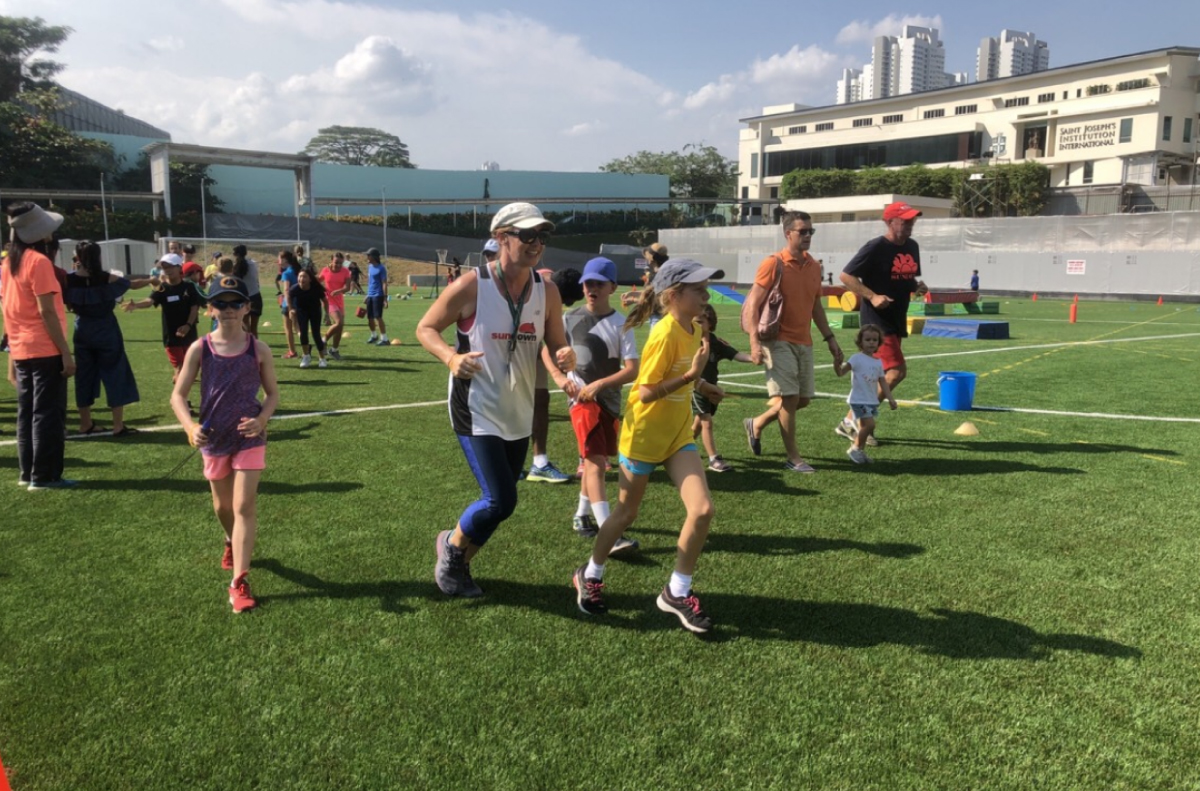 The 24th of August saw another wonderful opportunity for our community to come together through the Elementary School Lapathon 2019: Our Houses United In Service, in support of impoverished children attending the kindergartens and nurseries of the Lasallian schools in Colombo, Sri Lanka.

There was a tremendous sense of unity among all who attended and it was gratifying to see so many parents running (or walking!) with their children. A record $28,560.74 was raised which will go to support the meal programmes in the schools including the development of some of their libraries.

Click on the link for the full article: https://sji-international.com.sg/news/400

One Dream, One Team, One La Salle 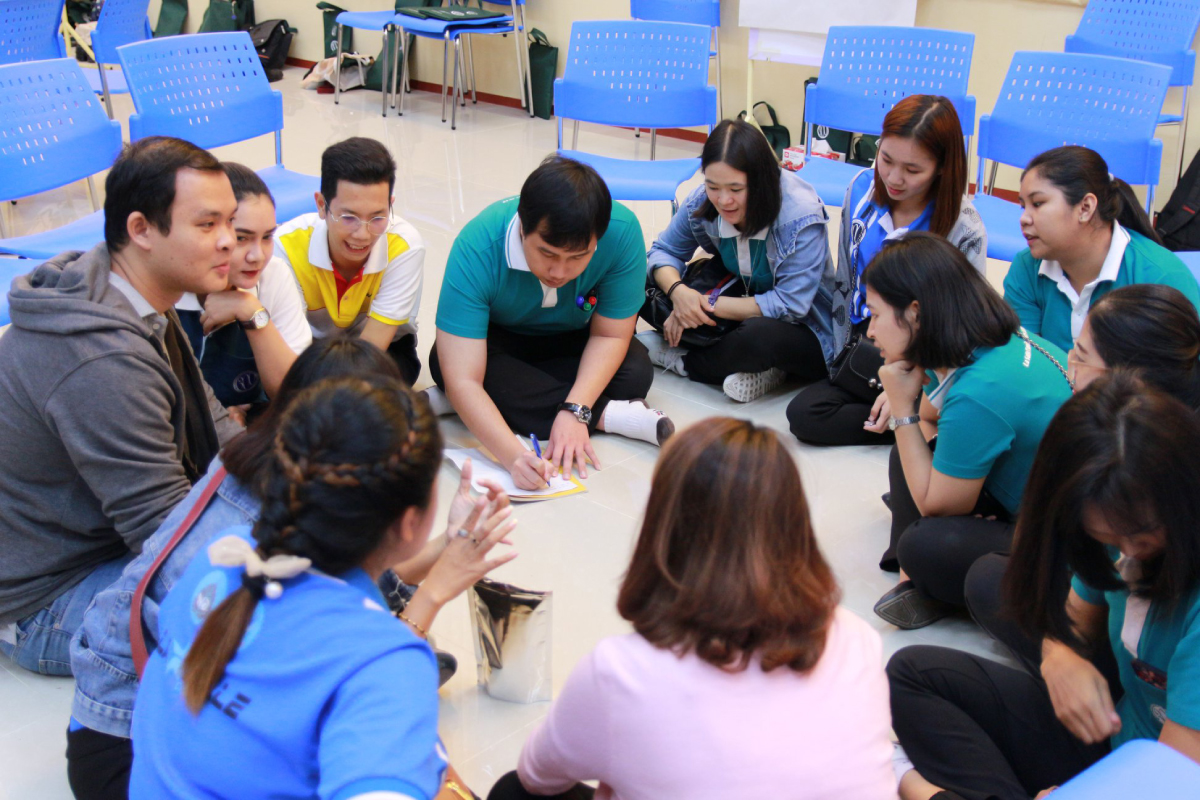 As part of the Tercentenary celebration, the Thailand Sector organised a seminar for new teachers who are part of the Lasallian Mission from 2015-2019. There were 107 new teachers who came together at La Salle School Bangkok on 5-6 October 2019. The theme of the seminar was “One Dream, One Team, One La Salle.” Br. Peter Boonchert FSC shared on the history of La Salle Schools in Thailand, while Br. Eugene Prapas FSC talked about the 12 Virtues of a good teacher. The main speaker was Mr. Warin Chaiaphabul, who focused on the main theme. We pray that this seminar will help the new teachers understand the Lasallian Mission in Thailand and continue teaching minds, touching hearts, and transforming lives. (Text & Photos: Br. John Pongpat FSC) 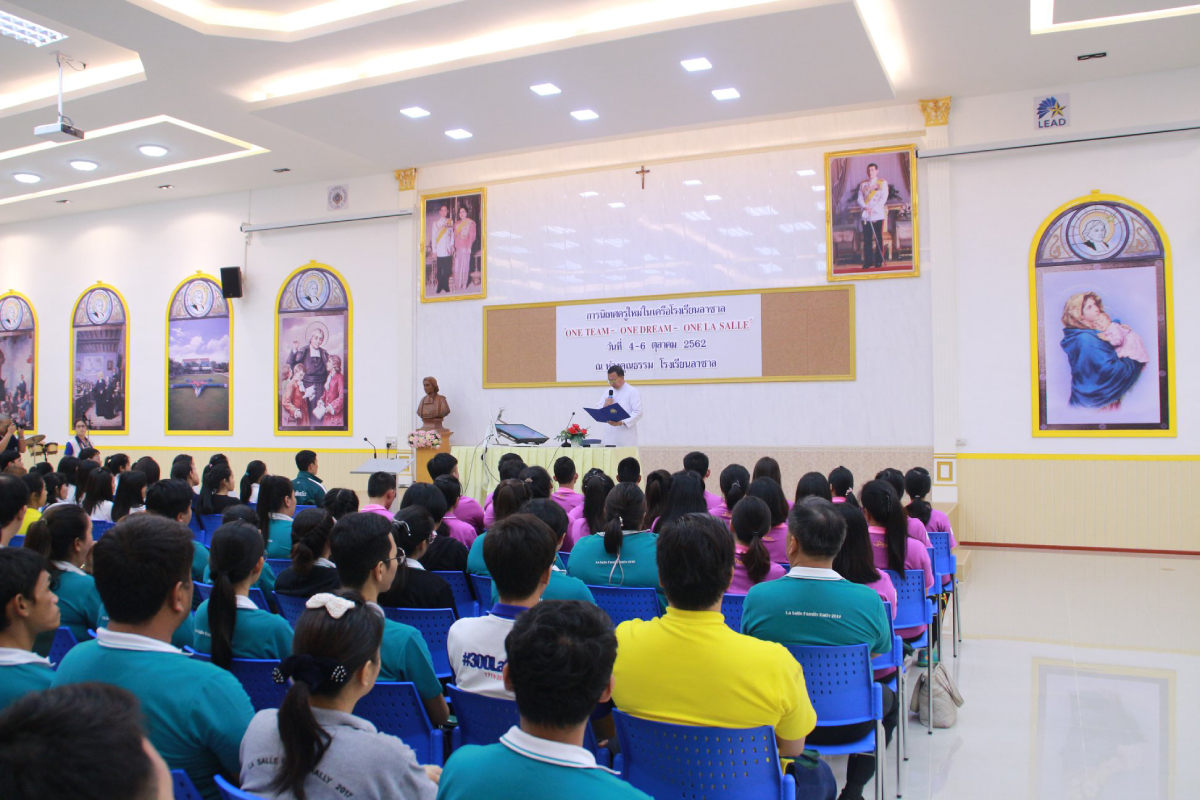 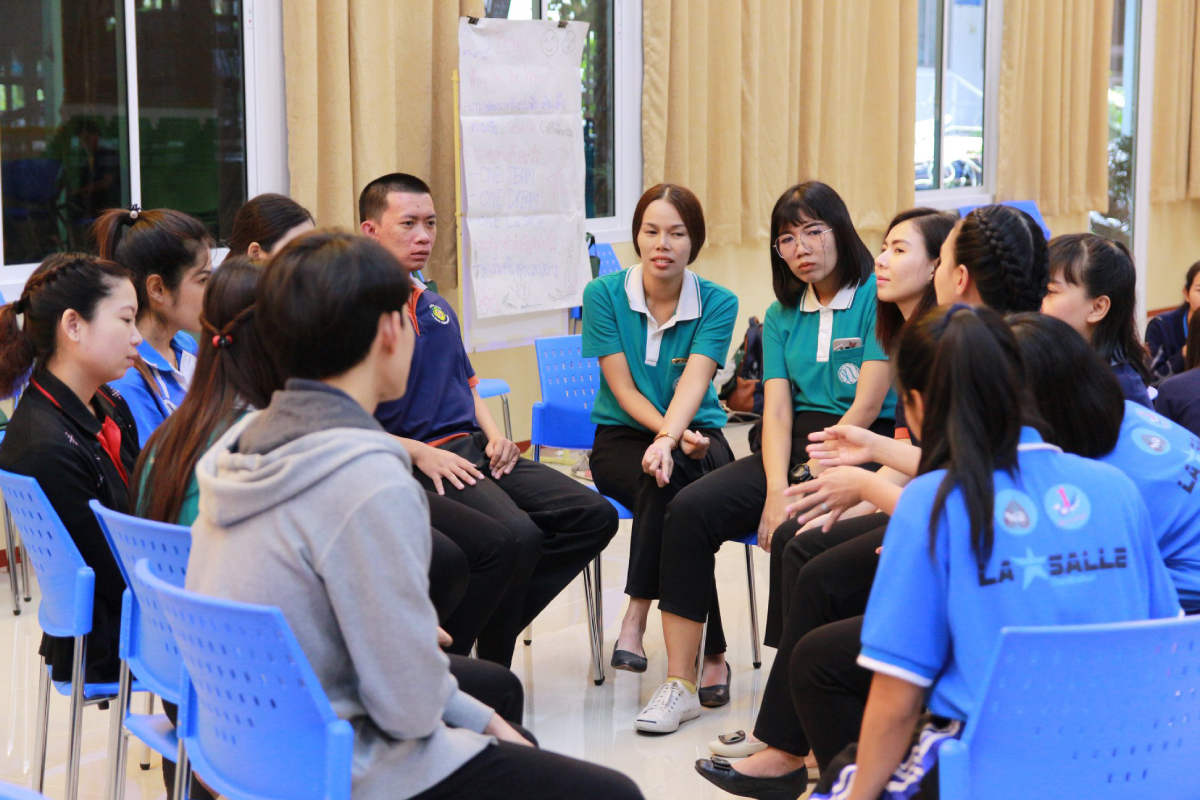 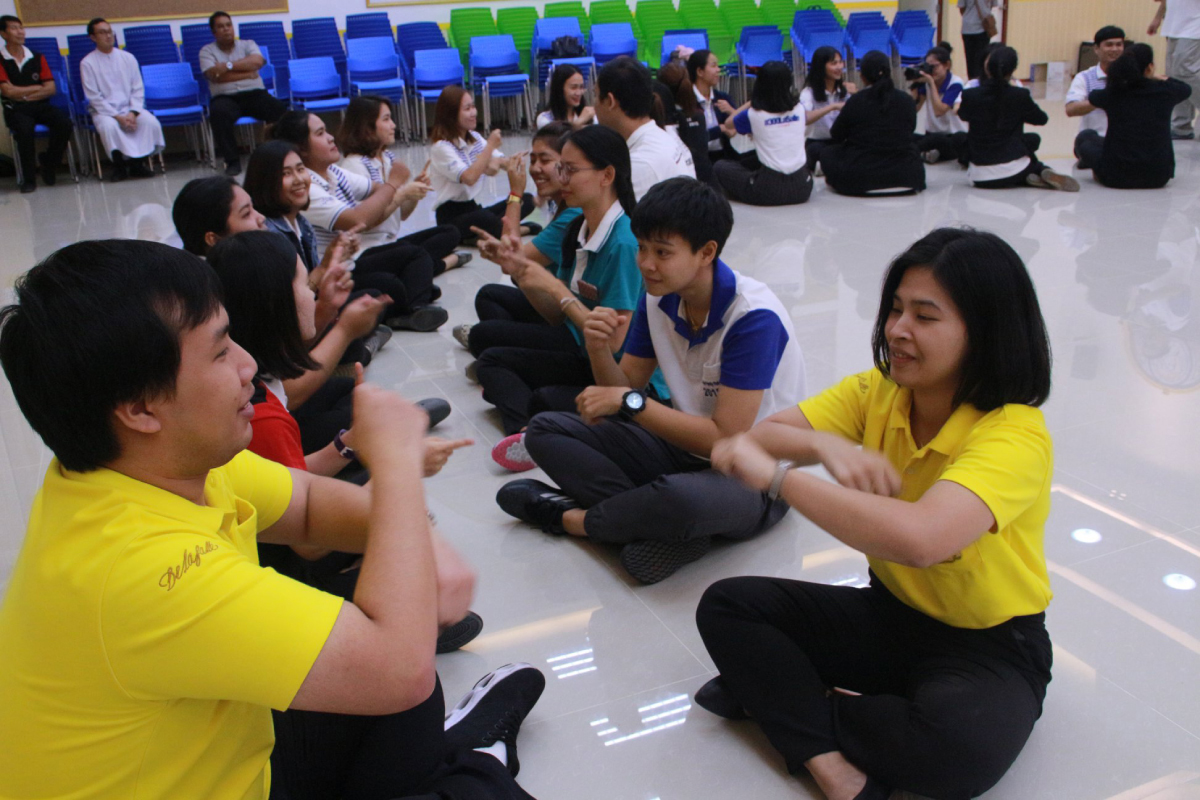 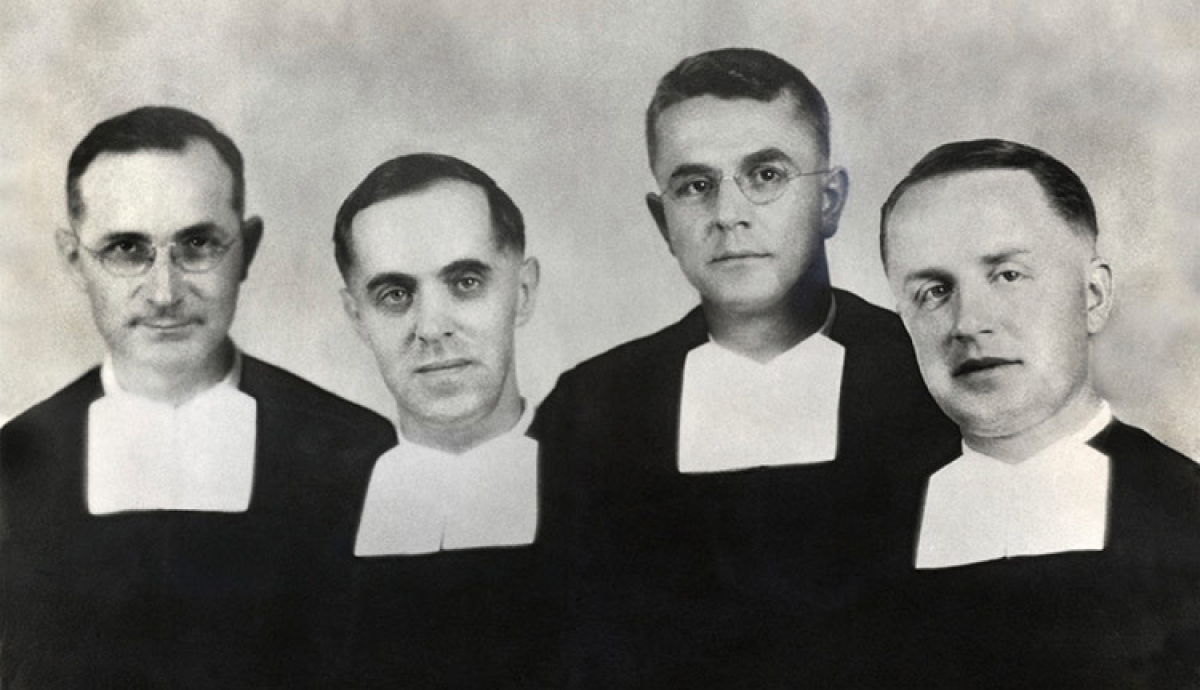 Four Brothers from French speaking Canada (Montreal) came to Hakodate in northern Japan, at the invitation of the Canadian Dominican Fathers responsible of the Catholic Church in that region in order to open a Catholic school for boys in that city. In 1934, a nice and wide piece of land was bought and plans were discussed. Unfortunately for various social reasons, to open a school was impossible, and the Brothers transferred to Sendai in 1936. A small language school was opened there, but soon, in 1936 and 1940, two of the Brothers were sent to different cities in Manchuria (China) joining other Brothers coming directly from Canada to teach in seminaries held by French or Canadian missionaries. A third Brother of the four was sent with the first Japanese postulant to Indochina, for his novitiate, and remained in Kuala Lumpur so he could come back with him at the end of the novitiate in 1941. But in 1941, war began in South East Asia.

“The foreign missionaries were incarcerated in concentration camps, either in Japan or Manchuria from December 1941 to August 1945. One of the two Brothers in Manchuria died in 1943 in the concentration camp. As for the Brother in Malaysia, he was not allowed to go back to Japan till after the war. Those four years were, for all, very difficult ones. It was only in 1946 that a work began for a new. First, an orphanage in Sendai in 1948 came up, then a school in the south of Japan, Kagoshima, in 1950. It was followed by a Brothers’ House in Tokyo, with an attached university students dormitory, which later were transferred to Hino, a suburb of Tokyo. And, at last, the desired school of Hakodate could open in 1960, after 28 years of waiting. Among those 28 years, 10 years were needed for the land, bought before the war, to be given back to the Brothers. And with God’ grace, organized by our Alumni, the school celebrated, in 2010, its golden jubilee.

Prayer For The Burning Amazon Forest 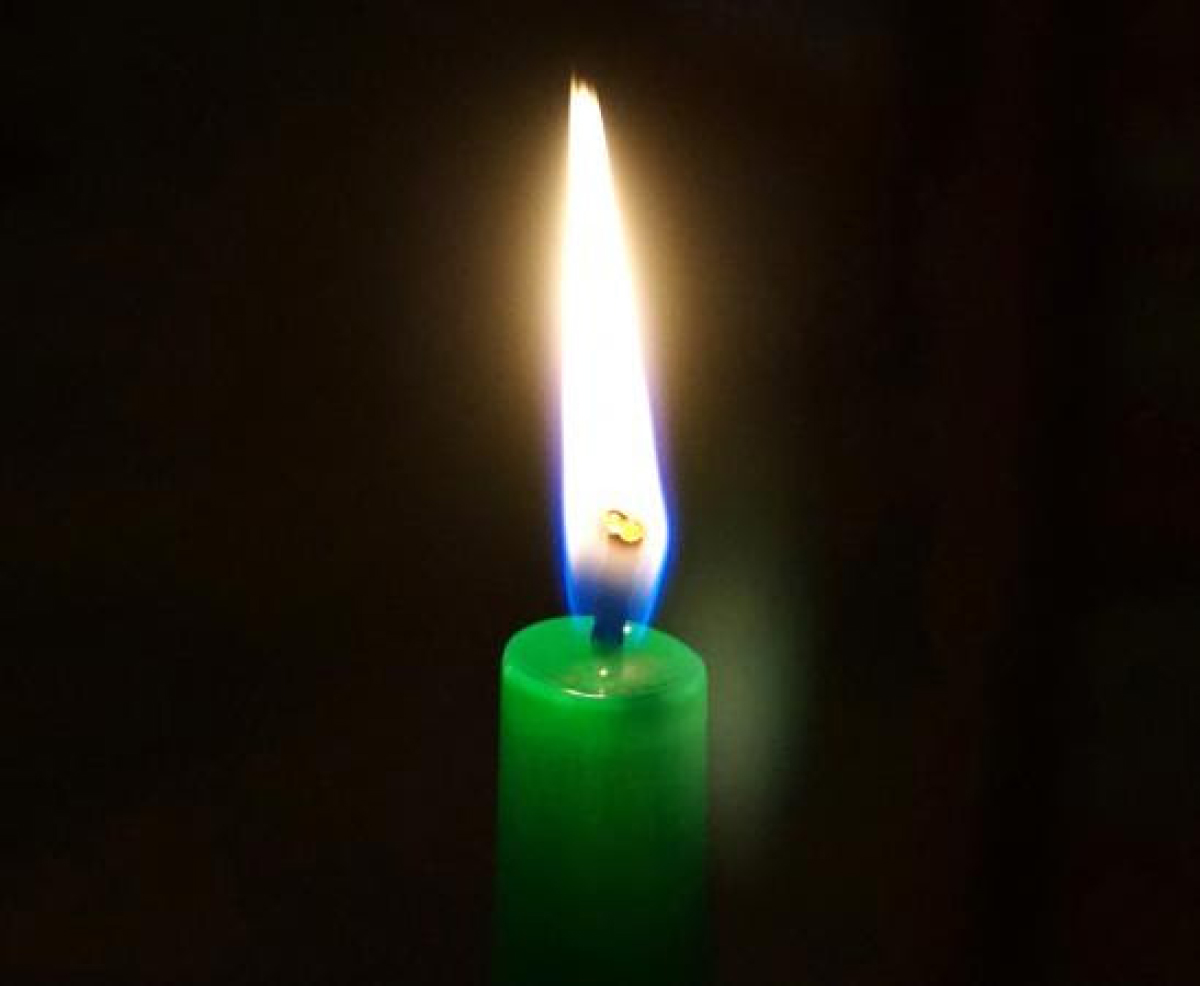 Loving God, the Amazon is on fire!
We come before you with a heavy and contrite heart.
We know Your heart must be deeply grieved
as You hear the cries of the innocent trees, creatures,
rivers and indigenous communities as their home burns.

We pray that in Your mercy, You will forgive us
For our way of life, for we have created the markets
For beef, timber and minerals taken from the Amazon.

We pray that You will forgive those who have set the fires
in the Amazon, those who have cut down the ancient trees,
those who plunder its precious resources,
to fulfill human desire for things.

Oh God, Your mercy is infinite
And only Your power can save us from choosing destruction,
Grant us Your grace to turn to better and kinder ways of living.
Rain down your love to heal the scorched earth and its inhabitants.
May Your love, justice and peace reign for all creation always.

In the name of Your son, Jesus the Christ we pray. Amen.